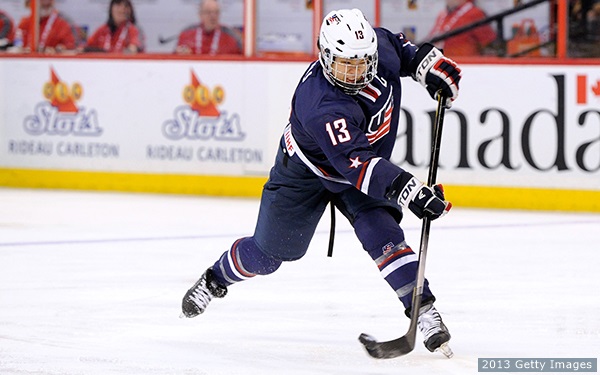 The second-most decorated American woman in Olympic Winter Games history, Julie Chu (1982-) has had one of the most accomplished international, professional, and coaching careers in hockey.

Chu was the first Asian-American to join the US National Team when she was selected for the 4 Nations Cup in 2000. A right-shooting centre, she would go on to compete in nine World Championships and four Olympic Games for the United States, winning five gold medals at the World Championships, including once as team captain in 2013.

Chu scored a total of 124 points in 155 games during her career for the US National Team, and won three silver medals as well as one bronze medal at the Olympics. At the 2014 Olympic Winter Games in Sochi, she was elected by her teammates to carry the American flag at the Closing Ceremonies.

“When I found out I was the flag bearer for the closing ceremony I was trying to process what a humbling honor it was…with the way that we select the flag bearer, being able to be elected by my peers is unreal, especially with the success that so many of our athletes have had.”

From 2002 to 2007, Chu played NCAA hockey for Harvard University, where she became the all-time leading scorer in NCAA history with 284 points in 129 games. A four-time finalist, she won the Patty Kazmaier Award as the best female college player in 2007 and also served as Harvard’s captain for two years.

After the 2014 Olympic Winter Games, Chu was an Assistant Coach at Concordia University in Montreal for 2 years before being promoted to Head Coach in 2016. She was named Coach of the Year in 2017.